This past week, my friend and fellow Microsoftie, Pete Brown, ran a neat online symposium for the Microsoft Patterns & Practices group. As part of the event, Pete did an hour-long session introducing the .NET Micro Framework, and many of the cool things you can do with the various devices in the NETMF ecosystem, including Netduino, Netduino Go, and .NET Gadgeteer boards like the FEZ Spider. He was even kind enough to do a demo of the Meeblipiator project I put together using his Gadgeteer MIDI module (the demo is at around 45 minutes in). Here’s the video…enjoy!

END_OF_DOCUMENT_TOKEN_TO_BE_REPLACED

[ NOTE: This post was written using the Visual Studio 11 beta and Windows 8 Consumer Preview…as with any pre-release software, the code and concepts are subject to change in future versions ]

One of the nice features of the new JavaScript Windows Metro style app templates in the Visual Studio 11 beta is that they provide built-in support for databinding, using sample data in a JSON array. Folks who have experience in the XAML world may not see this as a particularly big deal, since Silverlight and WPF have supported databinding for a long time.

For web applications, however, data binding is still a concept that’s evolving. While there are third-party libraries like Knockout.js that provide client-side databinding (and my fellow DE David Isbitski recently published a blog post detailing how you can use Knockout in a Metro style app, if that’s your cup of tea), but in general the web world is a little behind the curve compared to XAML-based databinding.

END_OF_DOCUMENT_TOKEN_TO_BE_REPLACED

Had to share this…Grant Kot, a cello student at Juilliard who also dabbles in C++, is the author of the fun and popular Grantophone app for Windows Phone. Grant was a special guest at the keynote of our New York City Windows 8 Developer event last week, and showed off his Windows 8 version of Grantophone (which you can get from the Windows Store if you have installed the Windows 8 Consumer Preview). Here’s the video, with Grant performing the Imperial March from Star Wars:

Fun stuff…I can’t wait to see what he comes up with next!

[This is part 5 of an ongoing series of posts examining the HTML5 Canvas element. In Part 1 of this series, I introduced Canvas and prepared a template to make further explorations a bit simpler, and also introduced JsFiddle, a neat tool for experimenting with and sharing web code. In Part 2, I demonstrated the ability of Canvas to allow your page background to shine through, and showed you how to render simple shapes on the drawing surface. In Part 3, I showed how to draw paths and text in Canvas. In Part 4, I showed how to transform the drawing context and scale, rotate, and skew your drawings.]

Simply defined, animation is a technique that provides the illusion of movement by changing the position, size, shape, or other properties of a drawn object over time. In traditional animation, artists draw a scene one frame (or cel) at a time, by hand, changing each scene just slightly with each new frame. Thankfully, we don’t have to go through such a laborious process to create animations with HTML5 Canvas.

So far in this series, we have only drawn shapes on our canvas once. In order to start using animation, we need a way to draw multiple frames, and at a rate that provides the necessary illusion of smooth movement. But first, let’s draw a single frame of content, and we’ll keep it nice and simple…we’ll use the same reference grid as in previous examples, and we’ll add a small white box to our canvas, using the following code (if you’re new to the series, see Part 1 for the page template we’re plugging this code into, or the jsFiddle below for the complete finished example):

In the code above, we’re using jQuery‘s ready event to draw our reference grid and a small white rectangle on the canvas. I’ve also added a couple of variables (in bold) to hold the current position of the rectangle. Here’s what our example looks like so far: 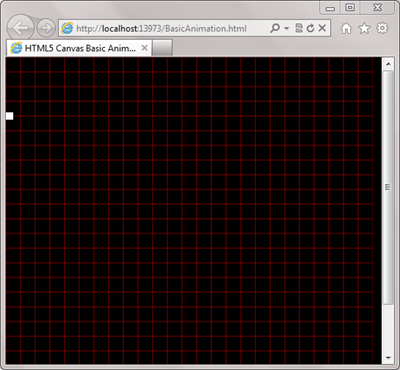 OK, so it’s a bit plain perhaps, but we can make it better with animation. To get started, as noted earlier, we need a way to draw multiple frames at a specific rate, and for that purpose, most folks use what’s called an animation or game loop, which looks something like this:

In the code above, I’ve created a function that will take care of drawing a frame of our animation each time its called. Recall from earlier parts of the series that setting canvas.width will reset the canvas. The rest of the code simply draws our content, then adds 5 to the posX variable which determines where our box is drawn, and if posX is larger than 500, resets it to 0. The last line is key…we use JavaScript’s setTimeout function to automatically call animationLoop every 33 milliseconds, which gives us a frame rate of approximately 30 frames per second (to get FPS, just take 1000ms and divide by the target frame rate – 1000 / 30 = 33.3333333333333). Here’s what it looks like:

Here’s a jsFiddle for the above example:

As you can see, it’s pretty easy to get things moving in JavaScript and Canvas. Of course, moving a little white box is just the start. Let’s go back to our pal from the previous entry in this series, and have a little more fun. We’ll add a few fields to keep track of some additional properties of the object we’re drawing (note that for more complex cases, it probably makes sense to look at creating objects to encapsulate all of the relevant properties for a given shape that you’re drawing), as well as a new function to aid in drawing our shape (new/modified code is in bold):

If everything’s working as expected, here’s what it should look like:

Here’s a JsFiddle with the final code from this post, if you want to play with the APIs:

Animation in HTML5 Canvas is pretty easy and straightforward to accomplish. Of course, there’s much more you can do, including abstracting some of the animation tasks so you’re not doing quite so much low-level drawing, or even taking advantage of 3rd party libraries to simplify your life.

Up next, I’ll show you some more advanced animation techniques…don’t miss it! 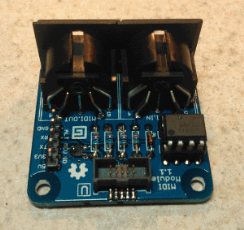