I’ll say this up-front, so I don’t waste anyone’s time. I’m not an expert on Web Components, and this post isn’t intended to teach anything about them.

With that said, over the last few days I’ve been catching up on some podcasts, and the topic of Web Components has come up several times. The technology (or, I should say, technologies, since there are at least 4 different specifications encompassed by the term) sounds very interesting and useful, but the lament I heard over and over was that there’s no support for these technologies in Internet Explorer, and no indication of when they will be supported.

What I wanted to share in this post is that there IS, in fact, a way to keep up with the status of various new technologies in IE, namely the Modern IE platform status page. On this page, you’ll find a searchable, filterable list of features, and their current status with respect to IE, as shown below: 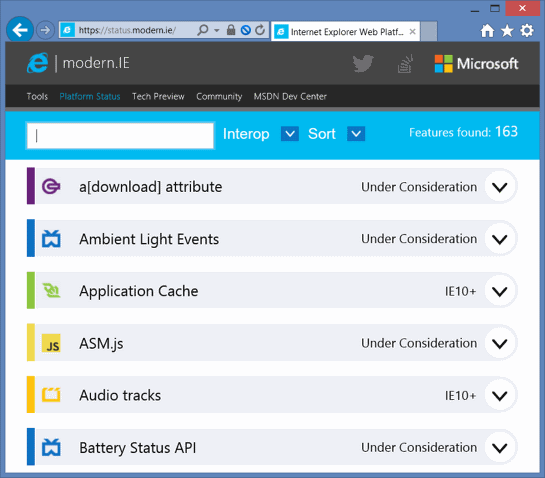 If you click the item you’re interested in, you’ll get more details, including the status of the given spec within standards bodies such as the W3C.

The search feature is robust and responsive, but if you search for Web Components, you’ll end up disappointed: 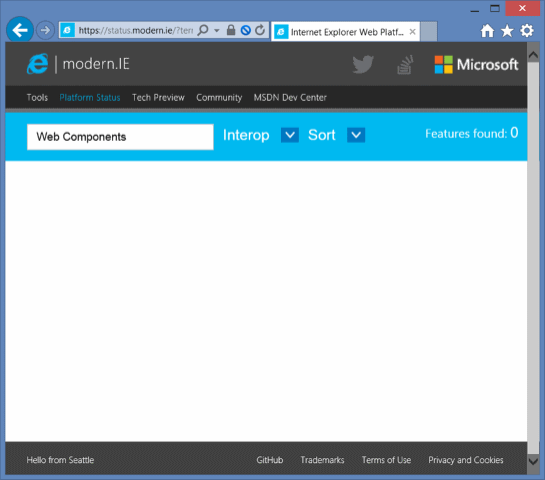 Perhaps this is why some folks think there is no information to be had on IE support for Web Components. However, if you search for the individual technologies, such as Shadow DOM, you’ll find that the site does in fact list the pieces that make up Web Components(Custom Elements, HTML Imports, Templates, and Shadow DOM), and their status, at the time of this writing, was “Under Consideration”: 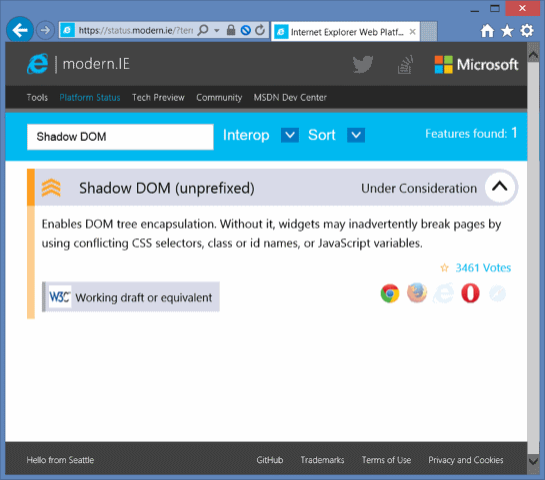 Based on the Platform Status page, I’d say that those who say that Microsoft isn’t saying anything about their Web Components plans are incorrect.

Web Components looks like a promising technology, and I’m looking forward to diving deeper on it in future posts. For the time being, if you’re looking for information, one good place to look would be http://webcomponents.org/. Another is http://component.kitchen/. Yep. That’s a .kitchen TLD. Weird, but true. Oh, and if you’re looking for general info about what is supported by which browsers, there’s always http://caniuse.com, which conveniently also includes data from the IE platform status page.

Are you working or playing with web components? Any comments on your experiences? Share them in the comments below!