With the understanding that the overlap in a Venn diagram describing folks who use Windows Media Center, XBOX 360 as a Media Center Extender, and Visual Studio on their WMC machine is probably vanishingly small, I thought it might still be useful to post the problems I experienced with this combo, and the solution.

I’ve been a longtime fan of Windows Media Center, ever since a former neighbor of mine showed me his WMC setup years ago. For a 10-foot experience, I think that the WMC “twist” interface works great, and it integrated very well with my Logitech Harmony remote, using my XBOX 360 as a media center extender (I also tried one of the dedicated media center extenders, but it was underpowered and slow, and just painful to use). 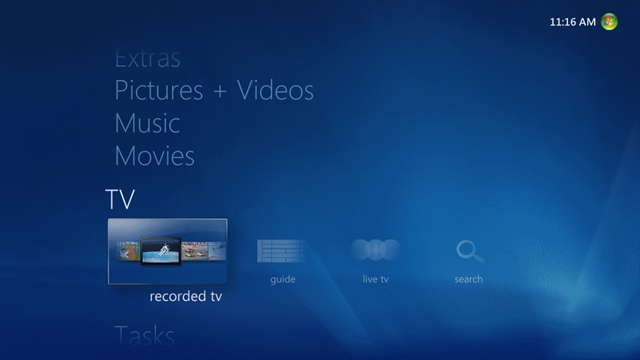 I first used Windows Media Center with a Dell XPS 420 machine (a powerhouse at the time I bought it), along with dual CableCard tuners, allowing me to record two shows at a time in full HD from my FiOS TV subscription. I’ve since dumped FiOS TV, and now just record the few shows I care about over the air. But it’s still a great solution, IMO, that gets a lot less credit than it deserves, probably owing to the fact that it does require a bit of TLC to get properly configured.

I’ve had my XBOX 360 working as a media center extender for pretty much the entire time I’ve owned it, and while I’ve had a few hiccups here and there, it’s generally been a great solution for watching recorded TV, whether FiOS or OTA. Music playing has been less peachy, largely due to deltas between how Zune Pass (now XBOX Music) handled licensing, which would result in “can’t play” errors…but I digress.

Recently, the XBOX stopped working properly as an extender, and as part of the troubleshooting process, I removed the extender and attempted to reconnect it. No dice. Kept getting a generic “Configuration Error” message from Windows Media Center when attempting to add the XBOX as an extender. Really frustrating, and I didn’t initially have time to troubleshoot extensively, so I just let it go for a few weeks.

What I found was an interesting cluster of symptoms. For one, each time that I would unsuccessfully attempt to add the XBOX 360 as a media center extender, the Media Center Extender service on the WMC machine would disable itself. I could restart the service all I liked, the result was the same, each attempt resulted in the service being disabled.

The event logs weren’t initially much help. There were some errors in the Windows > Application log, but it wasn’t immediately evident what they meant (more on this later). One of my Bing searches suggested looking at the Media Center logs under “Applications and Services” in the Event Viewer, and here I came across the following error (emphasis mine):

AHA! This was a key piece of information, because it highlighted the main problem…when you add an extender to a Windows Media Center machine, it normally creates a new user account for that extender, with the name Mcx1-[MACHINENAME]. If there is more than one extender, the numeric portion is incremented for each new extender. Now that’s what happens normally, but in my case, it wasn’t working for some reason. After a bit more digging, I found this post on answers.microsoft.com, which related directly to the other error message I saw originally in the Windows > Application log, namely (emphasis mine):

In short, the account creation process was failing because a file in the Default user profile (C:\Users\Default) could not be copied to the new account, due to permissions issues. And it turns out that the problem I encountered was with Visual Studio 2013 specifically, and is apparently resolved with Visual Studio 2013 Update 2. But since the machine in question isn’t my primary development box, I hadn’t updated VS2013 to that version yet.

I haven’t tried it, since I hadn’t found the note on the KB before I was able to work around the problem, but for my specific problem it seems like the “correct” solution would be to install Visual Studio 2013 Update 2 or later, which would hopefully fix the .SQM file permissions without resorting to a workaround. But for those who have this problem and no VS installed, there have been reports of other .SQM files with incorrect permissions that cause the same symptoms. In that case, following the steps outlined in the answer here (which is what I did) and restarting the Media Center Extender service, should restore your ability to connect an extender. It worked for me, anyway.

Any rational person would be forgiven for asking the question “why on earth would you go through all this?” The answer is simple…I’ve yet to find anything that gives me the same experience as WMC does, and while it’s a major pain to have to troubleshoot something like this, the other things I gain make it worthwhile.

One lesson I’ve learned from this is that, given the number of PCs I’ve got in my house, and the fact that my WMC machine (which used to also be my desktop, but no longer) is not my primary dev machine, it’s probably best to avoid installing anything unnecessary on that machine. In fact, I’m leaning towards picking up one of the new-ish Intel NUC (next unit of computing) micro-PCs, along with a USB tuner, and just pop that on the back of my TV as a dedicated Media Center PC, with no other purpose in life. That would also allow me to cut out the Extender middleman, and give me more flexibility on what kinds of media I can play back. But that’s a topic for a later post…