In case you missed the big announcement yesterday, the wait is over and those of you itching to try your hand at some NUI goodness on Windows with an official SDK can go grab the bits for the Kinect SDK for Windows beta. 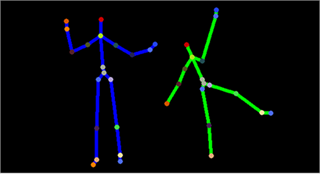 I downloaded the beta SDK yesterday during the all-day Channel 9 Live event showcasing what you can do with the SDK (the recording of the stream is available here…eventually, the recordings will likely live elsewhere on Channel 9). So far, I’ve just run some of the samples that come with the SDK, including a skeletal tracking sample, and a sample game that uses both skeletal tracking and voice recognition. Very cool.

I’ve also played around a bit with some of the additional samples that have been released, including the Kinect Mouse Cursor app, which as the name suggests allows you to use Kinect as a mouse, and also Kinect Paint, which is a great Metro-themed sample (source included) that shows a variety of cool techniques, including gesture recognition, and how you might implement a “click” selection technique similar to what’s used on the XBOX for selecting menu items.

Find Out More at MADExpo!

You can also get more information about the Kinect SDK for Windows and Kinect development in general at the upcoming Mid Atlantic Developer Expo conference in Hampton, VA. Two deep experts in Kinect and NUI will be on-hand, Josh Blake from InfoStrat and James Ashley from Razorfish. Josh was featured on one of the teams that showed off what they could do in 24 hours with the SDK during the live launch event yesterday, and will be bringing Kinductor, the sample app that allows you to conduct a MIDI-based piece of music via Kinect. Very cool stuff. Both Josh and James are presenting breakout sessions, but they’ll also be in our demo area showing off all kinds of cool NUI projects.

One important thing to note with the beta SDK…it is licensed for non-commercial use only. Microsoft has announced that a commercial SDK will be available in the future, but for now, make sure you read through the FAQ in terms of what is and is not acceptable use of the beta SDK. With that said, happy hacking, and please drop me a note if you create something cool and want help showing it off. We still have some room for demo projects at MADExpo, if you get it together quickly.

Below you’ll find some online resources that may be useful as well.

The Busy Developer’s Guide to the Kinect for Windows SDK – nice overview of the SDK and some of the samples I mentioned above, including a brief install walkthrough.

One thought on “Kinect SDK for Windows beta Now Available”