[ NOTE: This post was written using the Visual Studio 11 beta and Windows 8 Consumer Preview…as with any pre-release software, the code and concepts are subject to change in future versions ]

One of the nice features of the new JavaScript Windows Metro style app templates in the Visual Studio 11 beta is that they provide built-in support for databinding, using sample data in a JSON array. Folks who have experience in the XAML world may not see this as a particularly big deal, since Silverlight and WPF have supported databinding for a long time.

For web applications, however, data binding is still a concept that’s evolving. While there are third-party libraries like Knockout.js that provide client-side databinding (and my fellow DE David Isbitski recently published a blog post detailing how you can use Knockout in a Metro style app, if that’s your cup of tea), but in general the web world is a little behind the curve compared to XAML-based databinding.

As with most generated JavaScript files in the Metro style app templates, data.js uses a self-executing anonymous function to wrap the code that defines the sample data. This both ensures that the code that creates the JSON data (and related helper code) executes as soon as data.js is loaded, and also hides the internal variables declared in data.js so that they do not pollute the global JavaScript namespace.

Both application templates use the same sample data, which has the following schema:

In addition to declaring sampleGroups and sampleItems as JSON arrays, data.js creates a WinJS.Binding.List called list, and then calls its createGrouped method (passing in the parameters for grouping, which in this case are functions that return the group key and group), and finally loops through the sampleItems array using forEach, and adds each item to the binding list object.

Once the binding list(s) are available, they are typically bound to the HTML markup either declaratively with attributes or programmatically in JavaScript. For example, in the itemsPage.html file of a Split application, the default UI for displaying the groups is a ListView control, which is implemented as a div element with the data-win-control attribute set to WinJS.UI.ListView:

(note that in order for the data-win-control attribute to convert the div element into a ListView control, the app must call WinJS.UI.processAll(), which is done by default in default.js in the Grid and Split application templates)

In the case of the Split application template, the JavaScript file for itemsPage.html, which is named itemsPage.js contains the following code in the ready handler which sets the datasource of the ListView to the groups defined in the sample data:

(in the code above, ui is an alias to WinJS.UI)

The code above gets a reference to the ListView control by querying for the class name associated with the control, and then passes that object into the call to WinJS.UI.setOptions, setting the itemDataSource to data.groups.dataSource (which is the dataSource property on the WinJS.Binding.List object), and the itemTemplate to the item template defined in the markup (again, obtained by querying for the matching class name).

Notice again the use of the HTML5 data- attributes, in this case both data-win-control to define the outside div element as a WinJS.Binding.Template, and the data-win-bind attributes to define the relationship between attributes of the individual elements (for example, the src attribute of the img element) and the values to which they’re being bound (in the case of the img element, the src attribute is bound to the backgroundImage property, and the alt attribute is bound to the title property).

Once the code in the ready handler has executed, the call to WinJS.UI.processAll() from default.js will complete the binding process, and you should see something like the following: 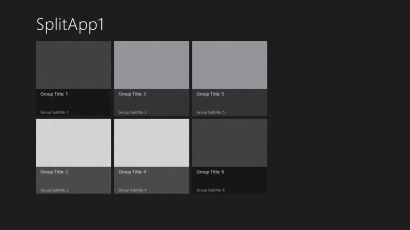 Databinding in JavaScript Windows Metro style apps is easy and straightforward, and having a template that provides a clear implementation with sample data can help you get started with your own application. This post just scratches the surface, but I wanted to walk through the basics of the databinding implementation before delving deeper into topics like customization and binding converters, which I’ll cover in future posts.

If you just can’t wait, here’s a list of additional resources that will help you dig deeper into databinding in JavaScript Metro style apps: