It’s taken me a bit longer to get to this post than I’d anticipated, but I wanted to share some info on the Mid-Atlantic Developer Expo, which wrapped it’s second iteration at the end of June. As with the first MADExpo in 2011, it was a fun event, combining software from a wide variety of platforms (from Windows 8 to iOS, from Perl to Ruby), with a healthy dose of hardware hacking and demos, along with a program for kids.

This year we added a third day, spread the MADKidz mini-conference over a couple of days, and welcomed nearly 250 folks to the Hampton Roads Convention Center for 3 days of learning, networking, and inspiration.

We had a great attendee party at a local venue called Cinebistro, which featured bowling, pool, great munchies, and more. And a pleasant surprise was that they did not have blasting music that made it impossible to talk (something which is unfortunately all too common for similar venues), so there was much great conversation, in addition to all the bowling and other fun.

I also had the pleasure of meeting a couple of folks from my travels in .NET Gadgeteer, including Gus Issa, founder and President of GHI Electronics (GHI makes many of the Gadgeteer boards and modules I use…full disclosure: Gus occasionally provides boards and/or modules to me for testing or demo projects at no cost…though my wife would tell you I’ve also spent plenty of my own money on GHI products as well). Gus was a small business sponsor at the conference, and we had a great time talking about some ideas for how to make our demo area even more awesome for 2013. I also finally got to meet Valentin Ivanov (aka Architect) who is arguably THE most knowledgeable person I know about .NET Gadgeteer and .NET Micro Framework stuff. There’s a reason he’s called a Legend in the TinyCLR community.

The first important task is thanking all the folks who made it possible:

Here are some links to blog posts about this year’s conference: 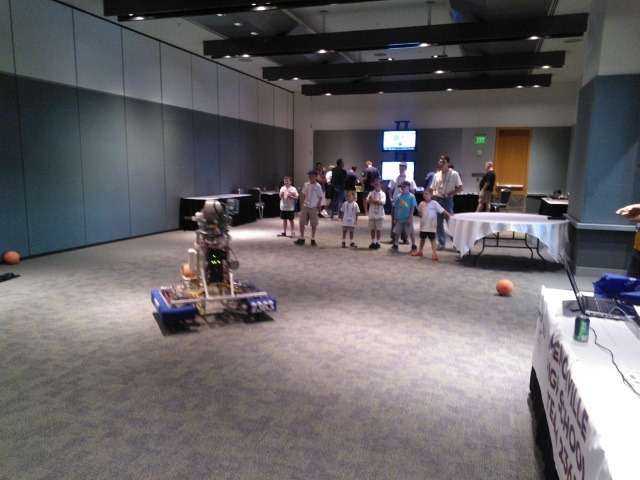 A couple of the MADKidz learning about electronics (with a gratuitous plug for Telerik, who was one of the sponsors for MADKidz and brought all kinds of SWAG to boot). Hard to tell from the back, but I think the boy on the left is one of Steve Bodnar’s kids, while on the right I’m fairly sure is my oldest son, Joseph.

More photos can be found at:

If you have any photos from the event you’d like to share, please drop me a note.

As was the case last year, we saw some fantastic twitter feedback on the conference. Here’s a sampling:

I’m definitely looking forward to MADExpo 2013, and will be sure to post when we’ve finalized dates for next year! 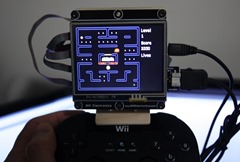 Valentin Ivanov (aka Architect on the TinyCLR Forums) just posted one of the more awesome projects I’ve seen for .NET Gadgeteer. He’s built a mini game console using a repurposed Wii controller, plugged into his custom Chucky module, to control a ported version Pac-Man (he’s also working on a port of Space Invaders). This is just the kind of project that I think makes Gadgeteer so awesome.

Go read his blog post for all the details, including his hand-cut and drilled mounting board that connects the FEZ Spider mainboard and T35 LCD to the controller.

Oh, and if you’d like to see this awesome project in action, come to MADExpo next week. Valentin’s is just one of the many cool projects that will be on display in our demo room. I’ll also be bringing some Gadgeteer coolness, as will Pete Brown, and Sean Westcott (and Sean’s project involves electroluminescent wire…awesome!). And I hear the peeps from 757 Labs will be back as well. Should be great fun!

Last year, it was my privilege to be a part of the team that brought a new conference to the Mid-Atlantic, the Mid-Atlantic Developer Expo (or MADExpo for short). The conference was born of many conversations and discussions in the community from folks wanting to do something a little bigger and bolder than some of the usual events we were used to. So I, Steve Bodnar, Steve Presley, Kevin Griffin, Sara Faatz. Kevin Hazzard, Pete Brown, Rich Dudley, and a team of volunteers planned and executed the first event last summer.

Why We Did It

Our goal was to create a fun and informative conference with some unique aspects. We included a full-day kids conference called MadKidz, run by Kevin Hazzard (with help from his family), which was a big hit. We included a dedicated room for hardware and NUI demonstrations, featuring a local FIRST robotics team, Chiptunes demo, Kinect and Surface demonstrations, the founder of Secret Labs, maker of Netduino, and all the geeky toys Pete Brown could pack into one table.

We had a keynote by Jeff Prosise, a Wintellect co-founder, on his passion for radio controlled flying, including a 1/6th-scale F-16 onstage. We brought folks to one of the finest facilities on the east coast, the Hampton Roads Convention Center, in the heart of Virginia’s Tidewater, a short drive from the beach, theme parks, and all the history you could want for a summer vacation. And with the assistance of great sponsors, we kept it affordable enough that just about anyone could come.

And now, it’s time to do it all over again.

END_OF_DOCUMENT_TOKEN_TO_BE_REPLACED

Anyone who missed this year’s inaugural MADExpo missed a fun show, and one of the best parts was the day 1 Keynote featuring Wintellect‘s Jeff Prosise.

Instead of regaling us with his expertise on Silverlight or other technologies, however, we decided to try something different, so Jeff spoke on his passion for his hobby of building and flying radio-controlled jet aircraft…as in with real jet engines. These babies fly at scale speeds of upwards of 2000 miles per hour, and can cost 10s of thousands of dollars to build. Jeff brought a couple of models to show off, including his 1/6th scale F-16 model (photo by David Giard): END_OF_DOCUMENT_TOKEN_TO_BE_REPLACED

I realized this evening that in my MADExpo wrap-up post, I left out some pretty critical players. For those of you who aren’t aware, the team I work on at Microsoft is unusual, in that I and my fellow Developer Evangelists do not work in Redmond, nor do we all work in an office together. We live and work in the local communities that we cover, so we don’t get to see one another in person all that often. END_OF_DOCUMENT_TOKEN_TO_BE_REPLACED

A couple weeks ago, the Mid Atlantic Developer Expo wrapped up, and I’ve finally had a chance to recover from the event. This was the first time that I’ve been involved in planning a conference of this scale, and while there was a ton of work involved, I really enjoyed the process, and I’m looking forward to starting on MADExpo 2012.

To wrap up the 2011 conference, I wanted to share some links to other folks who’ve blogged about their experience, as well as some selected photos and tweets from the conference as well. END_OF_DOCUMENT_TOKEN_TO_BE_REPLACED

Day 1 of the inaugural Mid Atlantic Developer Expo is done, and I’m settled in to try to get some rest for day 2, which promises more awesome content and great conversations.

We kicked the day off today with an incredible talk by Wintellect‘s Jeff Prosise, entitled “Why I Love the Smell of Jet Fuel in the Morning” discussing his love of R/C jet aircraft, and how that passion relates to his success in the software development world.

The two highlights of the keynote were the 1/6th scale F-16 that shared the stage with Jeff (and which Jeff built by hand), and the final video Jeff showed, which featured clips of what happens when things go wrong with R/C jets. Suffice it to say, there were several fireballs involved (I’ll see if I can get a copy of the video from Jeff to share). END_OF_DOCUMENT_TOKEN_TO_BE_REPLACED

I’ve been working on a fun and cool project for the Mid Atlantic Developer Expo, which opens NEXT WEEK, namely a Kinect-enabled Session Finder.

The project uses the recently-released Kinect SDK for Windows beta, a custom version of the Session Sorter code from the MADExpo website, hosted in a WebBrowser control within a WPF application. The WPF application is useful since I can use it to capture audio from Kinect and enable speech recognition, as well as to run the app in kiosk mode. Meanwhile, in the background, I’m running the Coding4Fun Mouse Cursor sample that I blogged about earlier today, which captures my gestures and turns them into mouse moves and clicks. END_OF_DOCUMENT_TOKEN_TO_BE_REPLACED